January 15th, 2003, a day that will live long in the memory. Myself and my good friend P.G were backpacking our way through New Zealand, and found ourselves in the small town of Franz Josef. This stunning alpine region just cries out to be explored, and on this cool clear morning, we set out on our half day hike on Franz Josef Glacier. Despite the icy landscape, the sun was warm, and along with a dozen other hikers, we made steady progress up and over the ancient ice.

Our group were slow, intent on enjoying the moment and the majestic views. Besides, to traipse over seven miles of ice more than 7,000 years old was somewhat surreal, and made me feel more than a little insignificant.

We pressed on, and eventually had to crawl through a carved tunnel onto a large ice shelf. But because our contingent were slow, more and more groups caught us up. The ledge soon became crowded, edging us towards the outer edge. There were carved steps off to the side, but it was slow and treacherous going for hikers to descend them, and as more and more bodies squashed onto the ledge, it became a little dangerous.

I moved closer to the edge to ease the crowd, and due to the raised lip, you couldn’t really see the drop beyond. For the icy terrain, we had to wear crampons, clunking bear traps strapped to our feet, and I for one wasn’t agile in them. They became tangled. And then, as if in slow motion, I fell back into the void. 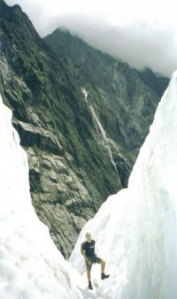 Now, it’s very difficult to explain quite what went through my mind at that moment. First, falling backwards, all I could see was bright blue sky above. Then I heard the screams, and thought that I was about to die. Two girls, along with P.G, saw me disappear over the side, and for all they knew, the drop was infinite. It wasn’t. But it was close to fifteen meters, which is a long drop onto ice as hard as concrete. When they scrambled to the lip, they couldn’t believe what they saw. There I was, far below, standing just a few feet from the edge of another deep drop. Glaciers are shaped by erosion, and resemble a series of giant waves. I had hit the ice on a down slope, the face of the wave, skidded on my back, and somehow ended up on my feet, sunglasses still in place.

I was very, very lucky. P.G and I were sharing one backpack between us, with only water and jackets inside. It was his turn to carry the bag, but for no reason at all, I vehemently insisted on taking another turn. To this day, we still don’t know why. But, when I hit, I landed on that backpack, and it broke the fall a little and prevented me from smashing my skull on the unforgiving ice. The only damage was a badly shredded arm and a cracked heel.

Our guide rushed down to check me over, and once he realized, with utter surprise, that I was fairly unharmed, he took another guide aside. He thought I couldn’t hear…but I could. He said, and I quote:

And that’s when it hit me how lucky I was. I was in shock, which helped keep the pain away, but the long walk down the glacier was slow and difficult. Our somber group, hushed because they knew they’d almost seen someone die, made careful, silent progress, and every minor slip on the now easy descent brought nervous chuckles.

By the time we made it back to the tour office, I was in quite a state. The staff treated me with some basic first aid, but what I needed was a stiff drink. P.G and I made it quickly back to our hostel’s bar, and within minutes several large gin and tonics had been downed. P.G too had been through it. After all, it’s not everyday you see a good mate disappear over the edge of a glacier. Once our nerves had calmed, we started talking about the experience. As the night wore on and the drinks flowed, the fifteen meters that I actually fell soon became twenty, then thirty, and every time we told the tale, it became more and more embellished. We had drunkenly turned ourselves into celebrities.

Years later, my brother Ian lived and worked in Franz Josef, and got to know some of the glacier guides. My story…the true one…is still spoken of in guiding circles as the ‘day the lucky bas**** fell and didn’t die.’ 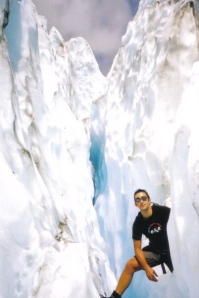 That night, our day on the glacier got labelled ‘Life Day.’ Truth was, I could easily have died, or at least broken my back during the fall.

But I didn’t, and I know how lucky I was.

P.G and I vowed back then that on January 15th every year, wherever we are in the world, we would raise a glass to Life Day.

Ten years on, we still do. 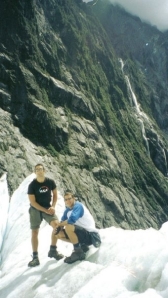 The Nomad and P.G, moments before disaster!