We’ve met some great characters during our time here on Koh Yao Noi, but without a doubt our favorite is Mr. Poong. Aside from our hammocks and the beach, the place we seem to spend most of our time is at his ‘STEPONE BAR.’

In the dozen or so times we’ve been, Leslie and I are always the only guests, and happily sip beers as Mr. Poong regales us with tales from his interesting life.

61 year old Mr. Poong hails from Burma, and is a retired sea captain, former chief of police and one time high school teacher, who came to Koh Yao Noi to escape death. We expected something like a violent military coup, or landslide or murder. No. Of his retirement he says, “If I stay in Burma I die. Nothing to do just eat and drink.”

He doesn’t need to work, he tells us, but running this tiny bar keeps him at least a little bit active. And it has another bonus; I asked him about his family, who live on nearby Phuket. “I’m happy with my wife, but I don’t like to stay. She always talking talking too much. But if I stay never mind, I shut up my ears.” I sense the male readers nodding in understanding.

Mr. Poong’s romanized Burmese name is Kha Yee Thwar Thu. He told us a Thai crew member once named him Poong after Thailand’s most handsome actor. “Perfect for me” he said. Hmm?

With so few customers in the current low season, our friend spends most of his time smoking and people watching from his open fronted bar. Often we’ve seen him napping at this table, or sprawled out on a camp bed near the fridge. “Customers come or not come, never mind. Sleep or wake up, never mind,” he says with a contented smile.

Like Leslie and I, Mr. Poong spent a few years in South Korea. Though our jobs were very different, he a sea captain and us teachers, we shared a common pastime- drinking soju. Soju is Korea’s favorite drink, and at a dollar a bottle, it’s cheaper than water. When we were last in Phuket, we bought our friend a bottle of soju as a surprise gift. Gratefully reminiscing, Mr. Poong told us “Local drinks very nice…you can travel a lot on soju.” Not sure what he meant, but we agree totally. 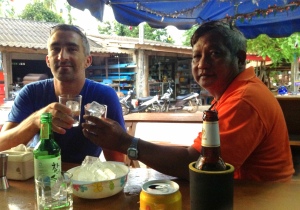 Friday night we sat with Mr. Poong for several hours, and were treated to the usual philosophical mix of tales, including lessons on love, a chilling ghost story, his somewhat surprising indifference to Aung San Suu Kyi, and about how he often suffers racism in Thailand for being Burmese.

Every time we visit Mr. Poong, it seems he has a never ending treasure trove of stories, so If you’re ever on Koh Yao Noi, go and sit with him for an hour at STEPONE BAR. I guarantee you’ll hear some fun stories and get all the island gossip. And if you take him a bottle of soju, you’ll make a friend for life.

All images courtesy of the Nomad.

8 thoughts on “Philosophy by Mr. Poong”